If you are considering vacationing in Spain, we hope that you will check out our dwellings in the Torrevieja area.

We will do our utmost to ensure that you will enjoy both our rental-offers and our service.

FACILITIES AT  "FERIEHUS i SPANIA"

We rent Apartments, Townhouses and Villas in Los Dolses and Villa Martin (Torrevieja-area)

Our rental properties are well-equipped, and some of them have their own swimming pool.

Torrevieja is a coastal city located on the Costa Blanca in Alicante province of southern Spain. The name is because the place until 1802 was just an old guard tower. "Torre" means a tower in Spanish and "vieja" means old. Salt is the main industry in Torrevieja since the city lies between the sea and two major salt lakes Las Salinas. This location means that Torrevieja has a very healthy climate, which is the main reason for the city's popularity among Norwegians, Swedes and other northern Europeans who seek Spain for health reasons.

Another reason is that Torrevieja is conveniently located just 30 minutes drive from Alicante and Murcia airports, making Torrevieja easily accessible from most European cities.

In recent years, the local economy has grown dramatically due to tourism and Torrevieja is a very cosmopolitan city that boasts a large proportion of Scandinavian, British, Irish, German and Eastern Europeans. Many of these live in Torrevieja all year long, along with many Spaniards who have their holiday home on the Costa Blanca.

There are several beaches in Torrevieja. Besides the city beach, located on the south side of the city, you also have La Mata Beach, located in the north end of Torrevieja. This is a 2.5 km long beach that has been named Blue Flag for several consecutive years because of its quality, cleanliness and accessibility. The beach is directly connected to the Laguna de la Mata nature reserve which is a great recreation area with a bustling birdlife, grassy areas and hiking trails.

Or send an e-mail to: 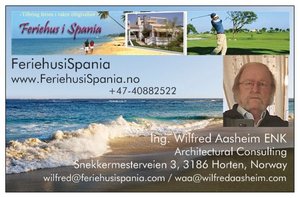